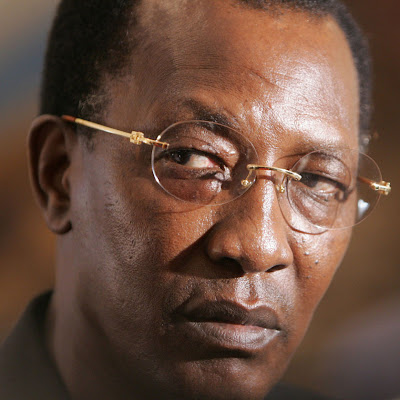 President Rupiah Banda has invited the President of Chad, Idriss Deby to pay a state visit to Zambia on dates yet to be agreed.

President Banda made the invitation on Saturday when he made a stopover in Chad on his way to France for the on-going France-Africa summit.

President Banda left for Chad on his presidential challenger. Planes from Zambia are not allowed into Eurpean Union (EU) space.

Deby is said to have agreed to come to Zambia.

President Banda is expected to make another stop over in N’djamena on his way from France to Zambia next week, probably to ‘pick up’ his challenger.

WHO IS IDRISS DEBY

According to the BBC, Idriss Deby came to power in 1990 after toppling Chadian President Hissene Habre – with the help of the French secret service.

A shrewd tactician, Mr Deby had been President Habre’s chief-of-staff, leading a series of victories over rebel forces in the 1980s and earning a reputation for courage and military prowess.

He was re-elected in 2001, and again in 2006 after amending the constitution, which had previously limited the president to two terms in office.

But Mr Deby, 55, appeared to have little genuine domestic support.

His presidency was dogged by accusations of corruption and political repression, and the 2006 poll was boycotted by opponents who claimed it was neither free nor fair.

He packed his government and armed forces with members of his Zagawa clan, which comprised only 1.5% of the country’s 10 million-plus population.

Critics say his single biggest failure was putting his clan before his country.

President Deby became known as a stubborn man who often ignored his advisors. From mid-2006 he suffered a spate of defections of former allies from his own clan to Darfur-based Chadian rebels.

Regionally he has been increasingly viewed with mistrust, and he fell out of favour with Chad’s former colonial master France over drilling rights in the 1990s.

President Deby is also thought to have health problems and has been known to fly to Paris for treatment to his liver.

The misery PF will perpetuate if given 5 more years