I didn’t grow up with my father-HH 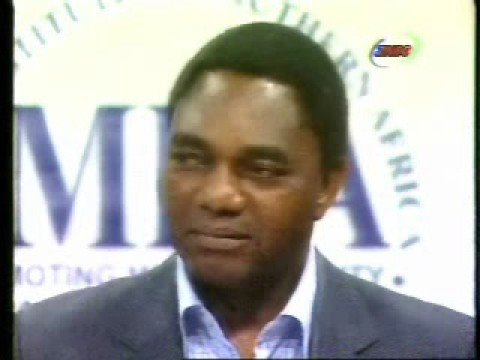 UPND president Hakainde Hichilema says he can not account for his biological father’s activities.

And Hichilema has revealed that he did not grow up with his biological father.

Hichilema was reacting to a press statement by one Gregory Chifire challenging Hichilema to tell the nation who his real parents are.

Hichilema said he does not want to be drawn into arguments with ‘the likes of Chifire’ and that  Chifire’ statement is sponsored by the MMD. He said the MMD is desperate due to the ‘impending’ loss of power in 2011 following the launch of the UPND-PF pact.

He said the allegations by Chifire do not matter because he, as a Zambian, qualifies to stand as president just like he did in 2008 and 2006.

He said Zambians should ‘judge me by my capabilities. I am a headman in Monze west. I am educated  and successful in my life. I have a vision for Zambia. That is what I should be judged on’.

Hichilema said that he does not wish to discuss the reasons he didn’t grow up with his dad and can not account for his father’s activities.

Below is the full statement from Chifire:

THE LAUNCH OF THE UPND/PF PACT

We welcome the launch of the UPND/PF Pact by the two political parties yesterday at Freedom Park in Lusaka.

We are however concerned that the leaders, Mr. Michael Sata and Mr. Hakainde Hichilema have not fulfilled basic requirements of disclosure of who they are and have also not disclosed what programs they would do for Zambia in the event that they were to take over State Power.

We are also saddened that the despite a successful launch the Pact remains without a known leader. However, if the hierarchy of speech making yesterday is to be respected, it remains what we always known that a secret agreement exists that makes Mr. Sata THE Pact’s candidate while Mr. Hichilema is a junior partner of the alliance.

We are deeply concerned that Mr. Hichilema has not made full disclosures to the country about who he is and who his parents are.

Mr. Hichilema was known as Sunny Hichilema until later in his life. He acquired his middle name Hakainde well into adulthood.

His father is Mr. Chintombwa. The name Hichilema comes from his maternal grandfather in whose household he grew up.

We understand that Mr. Hichilema’s father had many issues with the law and was always found in conflict with the law as a cattle rustler as Police and Prison records will show in Namwala, Monze and Mazabuka.

In our view, it is immoral for Mr. Hichilema to hide the identity of his father even if the father has an embarrassing history. Our own conclusion is that Mr. Hichilema is afraid that an unfair comparison might be made between the manner he accumulated his wealth and the past criminal conduct of his father.

We are also concerned about numerous reports reaching us about the way Mr. Hichilema treats his workers he hires in his cattle ranches across the country. The workers have complained of very harsh slave conditions of service and are given very poor remuneration.

We call upon Government through the Human Rights Commission and through the Labour commissioner to investigate these serious abuse reports and quickly protect these workers from exploitation perpetrated by Mr. Hichilema

We are so concerned that the Pact has not harmonized its programs, its manifestos and its vision for Zambia. This is dangerous as the unity between them is held by a very thin thread of naked ambitions to go to State House.

It is very difficult for Zambians to take this marriage seriously as it is flawed and weak and might prove to be a threat to national security.