It is public knowledge that late president Levy Mwanawasa had health problems during the entire period he led Zambia. In fact everybody knows that the man who became president of Zambia in 2001 was sickly.

But that does not eliminate the possibility of foul play in his death.  A sick person can also be killed.

It is very interesting therefore to hear that his widow is saying that something happened 30 minutes before he collapsed in Egypt and eventually died in France.

Maureen said that the MMD government was at the time in a hurry to hold elections in its bid to hang onto power without due consideration of the passing of her husband.

She said it was difficult for her to ask government to institute investigations especially about what happened in the last 30 minutes before President Mwanawasa collapsed and was evacuated to hospital.

So what happened? We do not know. But Maureen was there and could help the nation by saying what happened instead of releasing bits and pieces of information as it suits her.

What is of public knowledge is that president Levy Mwanawasa travelled to the Egyptian resort of Sharm el-Sheikh for an African Union Summit. He was chairperson of the Southern Africa Development Community (SADC).

He was supposed to present the SADC consensus on Zimbwabe at the AU summit on Monday June 30, 2008. On Sunday, June 29, Zimbabwean president Robert Mugabe was sworn in having just won the elections boycotted by the main opposition.

President Mugabe said that day that he was going to attend the Summit in Egypt to see “who is going to point a finger at me”. He had said that most African leaders present at that summit did not go through credible elections.

Mwanawasa had previously referred to Zimbabwe as a ‘sinking titanic’ and won accolades from pro-democracy activists.

On that Sunday, Mwanawasa (59) is said to have complained of sharp chest pains while in a pre-summit meeting or just after the meeting.

The government would do well to put this matter to rest by investigating, if they don’t already know the truth, and telling the nation.

Lining up pro-MMD NGOs to condemn Maureen is being irresponsible and such matters could actually arise in the future when people are not protected by immunity.

A lot of medical opinions have been expressed on why Mwanawasa could have just collapsed and died, but why at this particular time when he had had been sick and survived similar attacks on several occasions.

It is possible that it was due to his sickly condition but we have a doubting voice from someone who was present and this warrants full attention, whether we like the person speaking or not.

Trying to trivialise what Maureen said by concetrating on the smaller issues she mentioned won’t do. It won’t make the matter go away. It is true that whatever Maureen said in that interview, her main point was what happened to Mwanawasa before she collpased.

(LATEST: Patriotic Front President Michael Sata has backed the call by former first lady Maureen Mwanawasa to have a thorough investigation into the death of Zambia’s third president.

Sata has been quoted by one of the local radio stations saying that when a head of State has died there is need to have a complete investigation on what caused the death. He said, in the case of Zambia, this should have been done a long time ago.

Sata said even now, it is not too late to investigate what actually caused the death of Levy Mwanawasa.) 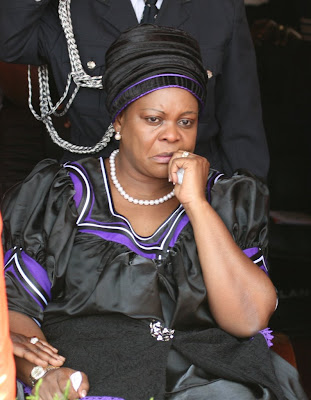