Towards a one-party state in Zambia -African Confidential

Towards a one-party state

The governing Patriotic Front’s tactics are far from original. The PF’s attempts to dominate the media and gaol opponents hark back to the era of the one-party state under the United National Independence Party (UNIP). Like the Movement for Multiparty Democracy (MMD) which it narrowly beat in the 2011 elections, the PF is using all manner of skulduggery to win by-elections and co-opt opponents to secure a parliamentary majority. President Michael Chilufya Sata and his closest advisor, the PF Secretary General and Justice Minister Wynter Kabimba, cut their political teeth in former President Kenneth Kaunda’s UNIP.

This week, the government lifted the immunity from prosecution of ex-President Rupiah Banda. Police then arrested Banda, the former leader of the MMD, on 25 March for abuse of office over a Nigerian oil deal, which he denies. Banda was then released on 500,000 kwacha (US$93,000) bail. Leaders of the United Party of National Development (UPND) have also been arrested (although later released) on murder charges that were widely believed to be trumped up. 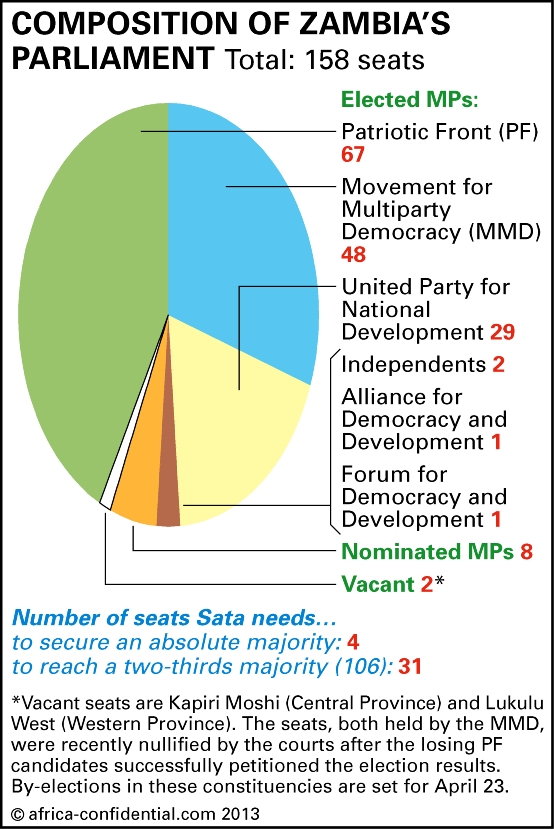 The PF’s parliamentary campaign seems to be working well. The governing party won an unexpectedly strong victory in the key town of Livingstone when Lawrence Evans, the PF candidate, took the seat from the UPND on 14 March after the poll was postponed for two weeks because of violence. The MMD slipped to a poor third place. The opposition claimed the police intimidated UPND and MMD candidates amidst a low turnout of just over 30%. The PF posted government ministers to the constituency for long periods and engaged in vote-buying and other persuasive methods, we hear. By employing similar tactics, the PF is expected to do well in the by-elections at Kapiri Mposhi and Lukulu West, due to be held on 23 April. Both the main opposition parties are reeling under the assault and it seems unlikely they can resist the PF’s momentum.

Defections and by-elections
The wave of by-elections is the result of the PF campaign to co-opt opposition MPs. All MPs who change party must go the polls, and the PF has been luring many to cross the floor. Thirteen opposition MPs from the MMD and the UPND are now serving in government and the total number of deputy ministers, the chief carrot offered to defectors, currently stands at 40. Sometimes, there are three or four deputies in one ministry (AC Vol 54 No 4, Kabimba looks ahead).

The MMD has wilted under the onslaught and its new leader, Nevers Mumba, does not possess the ammunition for a counter-attack. The by-elections and defections also allow the PF to establish a grassroots presence in areas where the party has historically been weak, and incorporate the constituency structures developed by rival parties to build a longer-term presence.

The campaign also includes petitions to the courts to overturn the election results in seats that the PF lost narrowly in the 2011 elections. Successful petitions result in by-elections. The overall aim is for the PF to achieve the two-thirds majority in Parliament necessary for amending the constitution. Lately it has become increasingly clear that Sata wants to move Zambia back towards a one-party state – although he is likely to tolerate a low level of opposition to keep up appearances and not institute the PF as a de jure single legal party.

The cobra strikes
Sata and the PF’s authoritarianism have been visible in the deregistration of the MMD in March 2012, Sata’s threat to dissolve Parliament if MPs kept voting against his legislation and then his castigation of the Anti-Corruption Commission for investigating Kabimba and another key ally, the Defence Minister, Geoffrey Bwalya Mwamba. Those investigations were dropped.

Kabimba is also in the process of creating a powerful party organisation that will mirror the state administration down to local level, just as UNIP used to do. Under UNIP the bureaucracy became heavily politicised and bureaucrats and political appointees vied for authority within a convoluted committee structure. While the strategy may help to entrench the PF, it could paralyse governance.

So far, the PF’s policy of co-option has resulted in five by-elections since the new government came to power in September 2011 but this will rise. At present, a number of MPs who have defected to the PF are appealing against their expulsion from their original parties. They are likely to lose these cases and when their expulsions are confirmed, they too will need to contest by-elections.

Regardless of their role in PF predatory politics, by-elections are still interesting litmus tests of the PF’s popularity a year and a half into its first term in office. Of the eight held so far – some of which resulted from the death of a sitting MP – the government has won only five. Yet even victories have other stories to tell. On 28 February, Gabriel Namulambe won the by-election in the rural Copperbelt constituency of Mpongwe for the PF after he had defected from the MMD. As expected, he won the seat for the PF with 4,600 votes, ahead of the UPND on 3,069 and the MMD on 901. Namulambe has since been appointed to a deputy ministerial position.

The result shows how, as in other constituencies, a united opposition could potentially unseat the PF. Cooperation between the two parties would have resulted in a higher opposition turnout that could well have denied the PF victory. The low turnout, at 27%, may be typical but it also suggests that the PF is failing to spark enthusiasm, despite the President and over half the cabinet going there to campaign. Indeed, the elections suggest a potential resurgence of the UPND. Although the party leader Hakainde Hichilema is frequently accused of tribalism for failing to break out of the party’s Southern Province base among Tonga speakers, there are signs that recent changes have created new opportunities for the third party of Zambian politics.

Fertiliser fury
In office, the MMD relied heavily on the support of rural areas whose livelihoods it subsidised through the distribution of fertiliser and by buying maize at above-market prices. The defeat of the MMD, along with the election of the more urban PF, means that these constituencies are now up for grabs. Although the PF hopes to build a support base in these areas by maintaining the MMD policy of purchasing maize at inflated prices, Sata has infuriated farmers by reducing free farm inputs from four free bags of fertiliser to two – even though he promised to raise the figure to 15 during the presidential campaign. Farmers were further disillusioned when the fertiliser did not arrive on time. On 5 March, the public outcry at the resulting shortage of maize and the consequent doubling of the price of mealie-meal – Zambia’s staple food – forced the Minister of Agriculture to apologise to the nation. These developments have enabled the UPND to make fresh inroads: in Mpongwe, it was the only party to win more votes than in the 2011 election.

The party appears to be picking up MMD votes and gaining support outside its traditional constituencies and in other rural areas, especially in the Copperbelt. The PF is still favourite to win the next election but this depends on Sata being present to lead it. Although the PF has many impressive leaders within its ranks, it has always been a one-man party, a marriage of convenience held together by Sata’s popularity. It is unlikely that any other figure within the government could maintain party unity or command mass support in his absence.

Sata’s health may therefore be the most important factor in the PF’s consolidation of power. Although hard facts are thin on the ground, many Lusaka insiders say that his health has deteriorated sharply and recent squabbles among his lieutenants suggest that they are preparing for a succession battle. If Sata does not lead the PF into the next elections, the opposition’s political fortunes will change for the better.

Photos of the day: filthy Lusaka

Why UPND remains opposed to Bill 10