The confusion kicked off with an announcement from President Michael Sata’s government that a plan to rebase the currency by three decimal places has since been put on hold. Meanwhile, it has outlawed the use of foreign currency in domestic goods and services transactions, with penalties for transgression that include up to 10 years in prison. The immediate upshot of this measure was a short-term appreciation for the kwacha as Zambians rushed to sell dollars through official channels.

Next up were policy measures forcing companies to repatriate export earnings back into Zambia, adding another impetus to a rising kwacha. Shortly thereafter, a Zambian government agency report claimed the country is on track to become the world’s fifth largest copper producer by 2015 with projected production of 1.5 million tons a year, or double today’s output.

The end of last week brought everything to a fever pitch as disagreement surfaced over just how much copper Zambia produced last year (Zambia Reports provides a nice summary of the competing viewshere). Meanwhile, the IMF projected Zambia’s 2012 real GDP growth at 7.7% with 23% growth in the mining sector, but the Economist Intelligence Unit forecasted the same figures at 6% and 2.8%, respectively. U.S. Geological Survey figures currently put Zambia as the sixth-largest copper producer in the world: 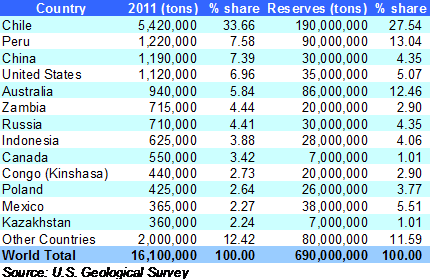 Which numbers should we trust?

Until we have more clarity on the data, there are certain unassailable economic realities that hold, regardless of which of the above figures, if any, are the right ones: 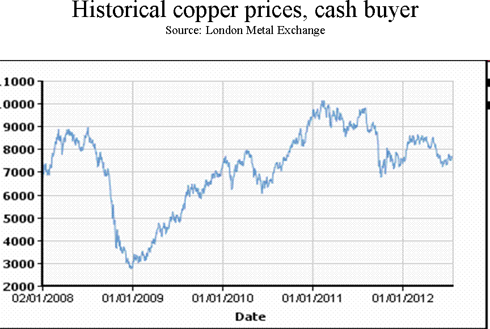 Of all the above points, the final two have the most profound implications for where Zambia and global copper are heading. If the Zambian government should succeed in achieving its short-term objectives with this week’s treasury auction, it may give the temporary appearance of having stumbled onto a solution that can loosely be summed up by the following steps:

By now, any macro analysts reading this should notice an eerie resemblance these steps have to the basic template of China’s money supply management cycle. Unfortunately for Zambia, the country itself does not possess the requisite global footprint to sustain this cycle for nearly as long as China has, and even if it did, the current administration has yet to demonstrate it has either the discipline or the vision to effectively steer such an agenda.

For the quickest evidence of how problematic this scheme can become, look no further than the fact that no matter how low kwacha yields clear at this week’s auction, they won’t come anywhere close to the near-zero interest the Zambian government will collect on its US dollar holdings. This puts the Zambian government on what is effectively the money-losing end of a carry trade that perversely becomes a break-even proposition for the government only if the kwacha undergoes a depreciation of crisis proportions. Otherwise, how wide this yield difference winds up being will necessarily drive the pace at which Zambia’s fiscal deficit proceeds.

Regardless, Zambia is still excessively beholden to China’s economic outlook. So whether due to internal forces or to fallout from what Michael Pettis recently detailed as “Inverted Balance Sheets“, an economic backlash looks likely to arrive in Zambia one way or another. Desperate times do indeed call for desperate measures, and Zambia is far from the only country entering unfamiliar territory right now. But one doesn’t need a full view of what’s ahead to know that pursuing solutions ranging from short-sighted to misguided will inevitably wear thin while the challenges facing Zambia remain as formidable as ever.

Letters to Editor 2876
Newer Post
It’s Sata who is a liar and hypocrite, explains Nevers Mumba
Older Post
Kambwili says youth bank coming, not sure if ZNS youths training will be compulsory